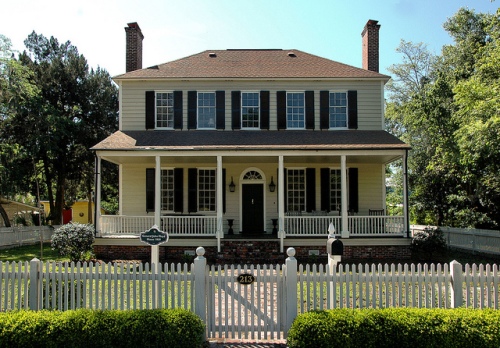 An interesting debate has arisen as to the identity of the house, to which I’ll only offer both opinions.

Marguerite Matthews, the fourth great-granddaughter of General Floyd and author of several genealogies of the family,  writes: John Floyd was born in Hilton Head, Beaufort District, South Carolina, the only child of Captain Charles Floyd and Mary Fendin. When he was sixteen he was apprenticed to a house carpenter for five years. He became so proficient, he was offered an early release but refused, preferring to fulfill his contract. He was privately tutored in a variety of subjects, including higher mathematics and French, by a distant cousin. John Floyd married Isabella Mariah Hazzard in 1793 in Beaufort District, South Carolina. (They had twelve children). In 1795, Charles Floyd along with his wife, Mary, and John Floyd along with his wife, Isabella Maria, moved to McIntosh County, Georgia where they settled on adjoining farms. In 1800, the Floyds again moved to Camden County, Georgia. They purchased large tracts of land in an area now known as Floyd’s Neck. Here they built two plantations one mile apart: Fairfield and Bellevue.Brigadier-General John Floyd owned town houses in St. Marys, Camden County, Georgia. She further asserts: The house labeled General John Floyd House, 1830 should be:
WILLIAM JAMES ROSE HOUSE, 1827. According to the Camden County Deed books for Lot No. 24 [now called Block 24], eastern portion facing Osborne Street, St. Marys, GA: Aug. 1788: James Seagrove owned the entire Lot No. 24 (Founder’s Lottery) 08 Aug. 1788: James Seagrove & wife, Ann, sold eastern half of Lot No. 24 to Nathaniel Pendleton of Savannah who purchased this lot for his son, Edmund Henry Pendleton (CCG Deed Bk. BC, p. 42 & 43) 01 Feb. 1825: Edmund H. Pendleton & wife, Frances, sold to Henry Sadler, part of Lot No. 24 facing Osborne Street (CCG Deed Bk. L, p. 197 & 108) 01 Jan. 1827: Henry Sadler & wife, Mary, sold part of Lot No. 24 to William Rose & Hugh Rose, merchants of Savannah. (CCG Deed Bk. L, p. 214 & 215) — commencing 60 ft. from South corner of Thomas Payne’s Lot on Osborne Street, then 100 ft. Southwardly to John Debrot’s line then Westwardly 200 ft. to Robert Rudolph’s line then Northwardly 100 ft. to the line purchased for a Masonic Lodge and library, then Eastwardly 200 ft. to the place of beginning. [Currently address is 213 Osborne Street]. William James Rose and his brother Hugh Rose were both b. in Scotland and migrated to Savannah, Georgia. They were merchants in Savannah. William James Rose married Mary Eliza Turner in 1828 in St. Marys, CCG. She was the step-daughter of John Boog and Isabella Kelly~King Turner Boog. William James Rose was the nephew of John Boog. William James Rose built the house [currently 213 Osborne Street]. The timbers were hewn in Savannah in or prior to 1830. (“Camden’s Challenge” – A History of Camden County GA, comp. by Marguerite Reddick; and in “Forgotten History” in which owner Wil L. Stucki had appraised by an historical architect – he said the Roman Numeral Numbered roof timbers were dated as early as 1830; personal phone call with Wil Stucki & Marguerite Mathews in 2009 in which Mr. Stucki said, “My friend, Mills Lane Jr., well-known in his field, is an historical architect in Savannah, drove to St. Marys to evaluate the house. He said that the Roman numerals etched into the roofing rafters indicated that the house was built prior to 1830.”). William James Rose died in 1832. Mary Mary Eliza Turner Rose re-married to Dr. Frederick Judson. Mary Eliza Turner Rose Judson died in 1837 in St. Marys. (Dr. Judson did not own that house). No deed of sale by Rose or by Mary Eliza or by Judson. No deed of purchase by Generak John Floyd. 20 Dec. 1837: John Floyd and wife, Isabella, sold to Thomas E. Hardee (Camden County Deed Bk. N, p. 125): Commencing at 100 feet from the North East corner of said square, then running South on Osborne Street 160 feet, then West 200 feet, then North 160 feet, then East 200 feet to the place of commencement. [Currently address is 213 Osborne Street] Why, then, isn’t the house called William James Rose House, 1827?

Fred Mercier disagrees. He notes:  There was an error in Ms. Mathews interpretation. The referenced 1827 purchase by the Roses begins 60 ft. from Thomas Payne’s property and continues 100 ft. along Osborne St. The General Floyd house is actually located on the 60 ft. of land between the Payne property and the Rose purchase. While there are no purchase documents existing, Floyd eventually owns both adjoining lots (referenced in his 1832 will) and will sell the entire 160ft along Osborne St. to Thomas Hardee in 1837. The Rose’s never owned the 60 ft. along Osborne that includes the Floyd house. The 1830 Camden County Tax digest lists Floyd paying taxes on an “unfinished house” on Osborne St. valued at $500. A later tax digest values his St. Marys property at $3,000. No house was built on the adjoining lot until the early twentieth century. Based on framing of the house, there are clues that an earlier and smaller structure may have existed and been expanded by Floyd. A potential mystery waiting to be solved!