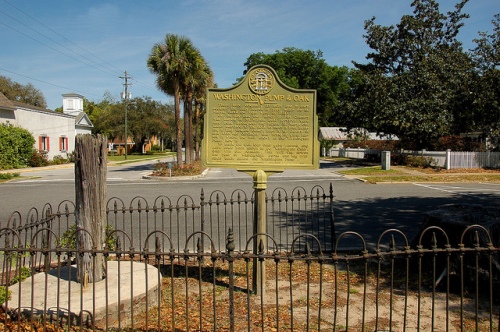 The Georgia Historical Commission marker, placed in 195 , notes: There were originally six wells one in each square, the only source of pure water for St. Marys, (until the tidal wave of 1818). On the day that the Father of the Country was buried at Mt. Vernon local services were also held throughout the nation. St. Marys citizens marched to the dock to meet a boat bearing a flag draped casket; bore it up Osborn St. and with due ceremony and firing of guns, buried it where the Well known as the “Washington Pump” now is. To mark the spot, four oaks were planted and have since been known as the “Washington Oaks”. Only this one remains. This well was driven the year of Washington´s burial and has ever since been called the “Washington Pump”.

In 1987, the last remaining “Washington Oak” was removed.