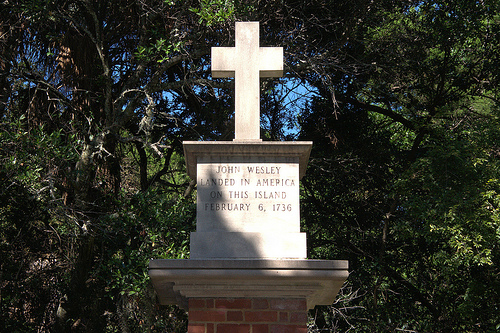 This simple brick and marble column commemorates John Wesley’s landing in America on 6 February 1736. Cockspur Island was then known as Peeper Island. The founder of Methodism was sent to the fledgling Georgia colony by the trustees to be a missionary. A quote from Wesley’s journal is memorialized on the column: “Fri. 6,-About eight in the morning I first set my foot on American ground. It was a small uninhabited island,…over against Tybee, called by the English Peeper Island. Mr. Oglethorpe led us through the moorish land on the shore to a rising ground,…we chose an open place surrounded with myrtles, bays, and cedars, which sheltered us both from the sun and wind, and called our little flock together to prayers.”

The memorial was placed in 1950 by the Georgia Society of Colonial Dames and is easily reached from the parking lot at Fort Pulaski National Monument.