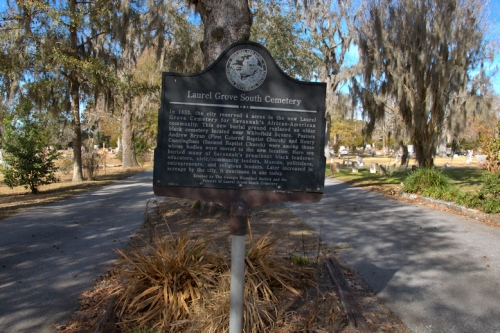 Laurel Grove South Cemetery is the final resting place of numerous African-American pioneers associated with the history of Savannah. It was created on the site of the former Springfield Plantation to address the fact that by the early 1850s, nearly all of the city’s burying grounds were nearing capacity. Originally just four acres, the cemetery now sprawls over ninety and is still in use. 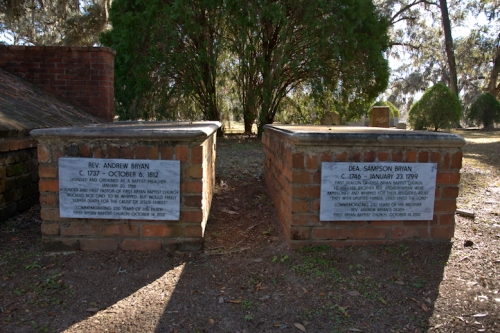 Among the most prominent memorials are those to the early leaders of African-American churches in Savannah.

Andrew Bryan, his wife Hannah, Kate Hogg, and Hagar Simpson, were among the first converts of George Liele, a slave who had converted to Christianity in the church of his master, Henry Sharp. Liele organized the First Colored Baptist Church of Savannah (later First African Baptist) in December 1777, was the first African-American to be ordained and the first Baptist missionary of any race to go to a foreign country. In 1782 he fled with his Loyalist master to Jamaica; Andrew Bryan assumed leadership of his growing First Colored Baptist congregation. Bryan and his brother Sampson were beaten and imprisoned for their preaching, but the intervention of their owner allowed them a degree of religious freedom. Bryan was ordained a Baptist minister in 1788. Soon thereafter, he purchased his and his family members’ freedom. Ironically, he grew relatively wealthy from a hauling business made successful by his ownership of slaves during the 1790s. He preached until his death in 1812 and is consider the father of the First Bryan Baptist Church by that congregation. The early overlapping histories of these congregations is somewhat conflicting.

There is some debate as to whether their remains were actually moved from the Old Negro Burial Ground near Whitefield Square and reinterred here, but their graves serve as a memorial to their integral part in the rich history of Savannah’s African-American community.

Henry Cunningham was a free man of color, slaveowner and a prominent entrepreneur in early Savannah. He was a founder and the first pastor of the Second African Baptist Church.

[Various spellings can of the surname, including Verdire, and Verdere, are present on the memorials, but Verdier seems to be the correct spelling, via genealogical records].

Andrew Martelle Monroe (Barely discernible dates on the slab inside the tomb appear to be 1906 and 1907, indicating this was possibly built to memorialize a very young child; another headstone is visible inside the tomb but I was unable to read it).

Reverend William J. Campbell (1 January 1814, though records state 1812-11 October 1880). Maxwell was born a slave in Savannah, baptised by Reverend Andrew C. Marshall in 1830, and was freed by his mistress, Mrs. Mary Maxwell, in 1849. He was licensced to preach in 1855 and served as an assitant to Reverend Marshall until the former’s death in 1857. Subsequently, Campbell became the fourth pastor of the First African Baptist Church. Reverend Marshall was quite progressive, replacing the wooden church building with the brick one which stand to this day. He was also on of 20 black clergymen invited to meet with General William T. Sherman on 12 January 1865.The meeting was an effort on Sherman’s part to address the needs and concerns of African-Americans after the end of the war. As a result of the meeting, Sherman issued Special Field Order No. 15, which came to be known as “40 Acres and a Mule”. 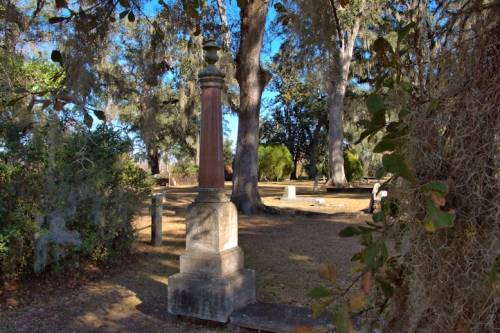 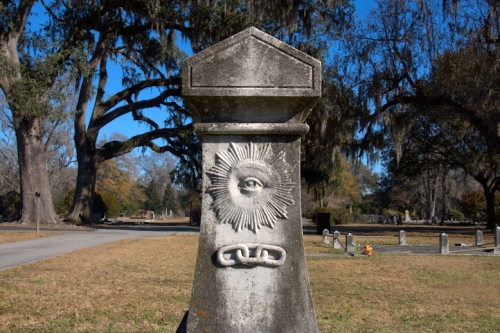 The All-Seeing Eye of God, also known as the Eye of Providence, present on the side of his headstone indicates a Masonic connection. 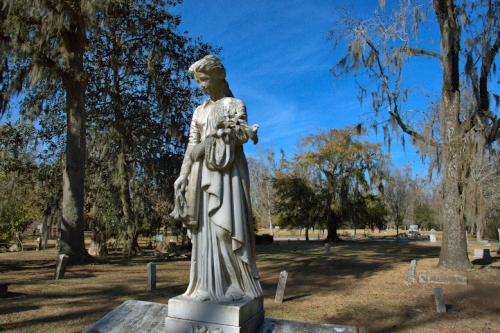 The Davis memorial is one of the most accomplished in Laurel Grove South and includes the statue and winged death heads, enclosed in formal coping. 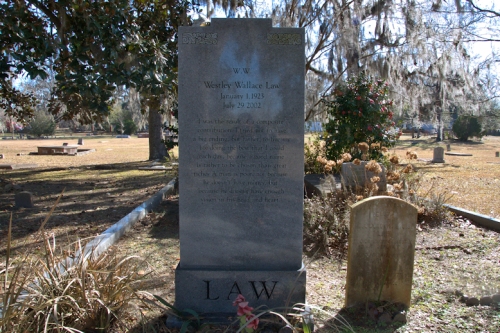 W. W. Law was a giant of the Civil Rights Movement in Savannah, known locally as “Mr. Civil Rights”. The history that follows was written by Charles J. Elmore for the New Georgia Encyclopedia.

Westley Wallace Law was the only son and the oldest of the three children born to Geneva Wallace and Westley Law. He came from a poor family and began working at the age of ten to help his mother after his father died. He never married. Later on he credited his success in life to his mother and to Lillie Belle Wallace, his grandmother, who instilled in him a love for reading and social justice. He was also inspired by his mentor, Ralph Mark Gilbert, pastor of the First African Baptist Church, who revived the local branch of the Savannah NAACP; and he admired John S. Delaware, his boyhood scoutmaster, who was a Savannah NAACP official. In high school, as a member of the NAACP Youth Council, Law protested segregation at Savannah’s Grayson Stadium and worked for the hiring of a black disc jockey at a white-owned local radio station. Later in college he served as president of the NAACP Youth Council. Law often stated that he would not have received a college degree if Georgia State College (now Savannah State University), where he enrolled in 1942, were not in Savannah.His mother did washing and ironing for white families for very low wages, and there was no money to send Law to college. He worked at the white YMCA in Savannah to finance his education. After completing his freshman year Law was drafted into the army to serve in World War II (1941-45). Upon his discharge the GI Bill paid for the rest of his education at Georgia State College, where he earned a bachelor’s degree in biology.

For many years Law served as the scoutmaster of Troop 49, First Bryan Baptist Church, where he also taught Sunday school. He worked for the U.S. Postal Service as a mail carrier for more than forty years before retiring in the 1990s. In 1950 Law became president of the Savannah NAACP. In 1962, with the Reverend L. Scott Stell, chair of the NAACP Education Committee, and others, he brought a lawsuit against the segregation of Savannah–Chatham County public schools before the U.S. District Court. U.S. district judge Frank Scarlett held the petition so long that the student plaintiffs graduated from high school. The NAACP then had to refile the case, citing a new group of black children. Law and the NAACP refiled, and in 1964 the Fifth Circuit Court of Appeals ordered public schools in Savannah to be desegregated.

In the 1960s Law began to lead weekly mass meetings at two Savannah churches, Bolton Street Baptist and St. Philip A.M.E., where he advocated passive resistance to segregation. On March 16, 1960, Carolyn Quilloin, a NAACP Youth Council member, was arrested for asking to be served at the Azalea Room lunch counter at Levy’s department store in downtown Savannah. This protest led to others. Law led wade-ins at Tybee Beach and sit-ins at Kress and Woolworth’s lunch counters with NAACP youth workers. He also led an eighteen-month boycott of Broughton Street merchants that forced Savannah’s white leaders to compromise on civil rights.

Law believed that nonviolent means were the best way to open the city for blacks. He strongly opposed night marches favored by Hosea Williams and his Chatham County Crusade for Voters, believing the night marches allowed people with violent agendas to take to the city’s streets. The Crusade for Voters, headed by Williams, was a separate civil rights organization that was allied with the NAACP. This difference in strategic approach caused a rift between Law’s NAACP and Williams’s Chatham County Crusade for Voters. The rift between Law and Williams prompted Williams and others to leave the NAACP and join forces with the Southern Christian Leadership Conference.

In 1960 Malcolm Maclean became Savannah’s mayor. Maclean worked with Law and Eugene Gadsden, then the NAACP’s legal counsel, and credited them for keeping violence out of Savannah’s civil rights struggle. Under Maclean, public libraries and store lunch counters were integrated. Signs designating racially separate facilities at city– and county-owned buildings came down. These triumphs came at considerable personal cost for Law, who was fired from his job at the U.S. Post Office in 1961 because of his civil rights activities. National NAACP leaders and President John F. Kennedy came to his defense, however, and a three-member appeals board reinstated him.

Law retired as Savannah NAACP president in 1976, after serving for twenty-six years. He then turned his attention to the preservation of African American history and historic buildings. He established the Savannah-Yamacraw Branch of the Association for the Study of Afro-American Life and History (ASALH). Law founded the Ralph Mark Gilbert Civil Rights Museum in honor of his boyhood mentor and pastor, Ralph Mark Gilbert, who revived the Savannah chapter of the NAACP and is considered to be the father of the civil rights movement in that city. As president of ASALH, he established the Ralph Mark Gilbert Civil Rights Museum, Negro Heritage Trail Tour, King-Tisdell Cottage Museum, and the Beach Institute of African American Culture.

Law received honorary doctorates from Savannah College of Art and Design (1997) and Savannah State University (2000), the Distinguished Georgian Award (1998) from the Center for the Study of Georgia History at Augusta State University, the National Trust for Historic Preservation’s National Preservation Award (2001), and the Governor’s Award in the Humanities (1992).