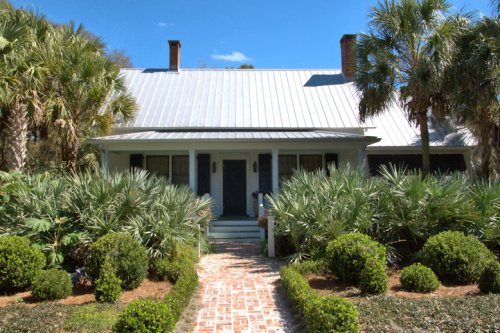 The Georgian Cottage is not the most prolific but perhaps the most iconic house type among Darien’s oldest surviving post-Civil War structures. Oral tradition suggests that this was one of the first built  after the war, which would corroborate the circa 1870 date most commonly cited. [Though lumber mills were rebuilt soon after the Civil War, it was a few years before residential construction commenced]. I’ve been unable to locate any information about the builder, but thanks to the present owners, Noel Gieleghem & Brandon Tyson, I’ve been able to fill in a few of the missing pieces. Noel notes: We are sadly ill-informed about the history of the house. [Mary Sue Rogers, who lived in the house as a little girl, shared some of the information with Noel. Her father was Conrad Rogers]. We believe it was built in 1870…The Florida room on the south side was added by Conrad Rogers in the late 1940s. It had a flat roof but we put on a pitched roof to match the other part of the house. A kitchen and back bathroom were also added at some point. There was just a stoop on the front when we bought the house and we added a front porch. Mary Sue confirmed that there was indeed a front porch on the house originally, similar to the one we re-added. The Robert Bennett family were later owners.

Noel & Brandon have tastefully renovated the house and their beautifully landscaped yard is a highlight of the neighborhood.