The Atwoods were among the first families in the McIntosh County involved in commercial shrimping. Their local origins can be traced to 1824 when Ann McIntosh of Cedar Point married Henry Skilton Atwood, a New England native. Their sons, George E., James, and Jules Atwood, were all prominent in 19th-century McIntosh County. George is credited with the naming of Valona [for a timber vessel from the Albanian port of Valona which worked in Sapelo Sound]; James and Jules began the seafood cannery at Cedar Point. In the late 1880s, Henry G. Atwood, a leading timber broker and great-grandson of Henry & Ann Atwood, began construction of this home, which was completed circa 1890. 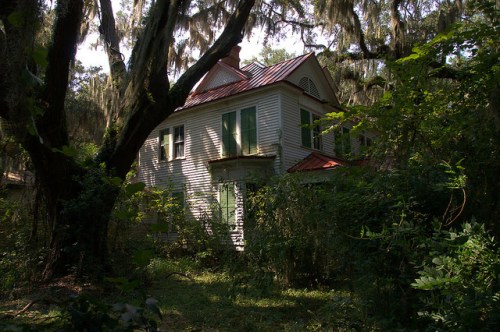 The house is a remnant of a lost era on the coast. It was an instant favorite and its charm is barely expressed by something as simple as a photograph. It’s part of a tight-knit neighborhood that keeps a watchful eye on it, but luckily, it’s also video-monitored just in case. I’m unable to give directions to the house, out of respect for the neighborhood and the owners. Thanks to Bill Bolin for the background information and to Quincy Roberts for bringing it to my attention.

This is right around the bend from Cedar Point Seafood.