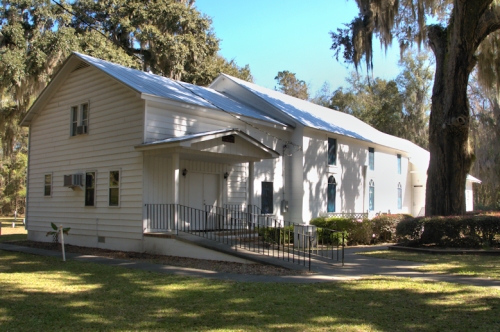 Though it has been expanded during its history, the original circa 1869 core remains in this venerable church, built by Freedmen. Enslaved men and women established this congregation circa 1859 and when they were able, they built their own house of worship, which still serves their descendants to this day. If you’re driving to Christ Church or Fort Frederica, don’t overlook this important part of the island’s history. 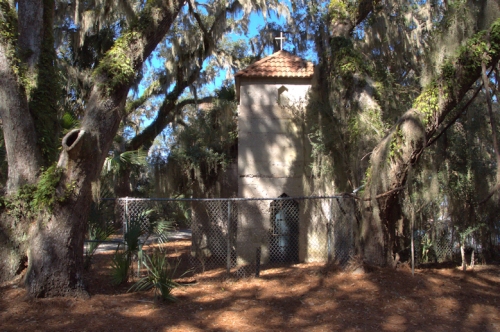 It’s been shrouded in mystery and rumor for much of its history and the Pink Chapel (modern name) was actually built as the result of a feud between two families. But it wasn’t pink from the bloodstains of slaves (the coloration was due to lichens that few on the tabby walls) and wasn’t a temple for satanic followers, as some urban legends have indicated. 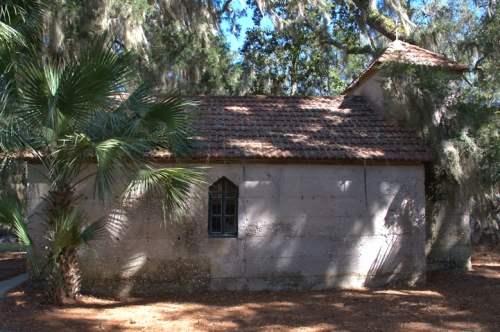 The original chapel was erected in 1838 on the grounds of Colonel William Wigg Hazzard’s West Point Plantation as a place of private worship. Col. Hazzard’s brother, Dr. Thomas Fuller Hazzard, who owned Pike’s Bluff, had a feud with John Wylly, owner of nearby Village Plantation, over land lines. A duel was called for but never commenced. However, when the two met by chance at the Oglethorpe Hotel in Brunswick, on 3 December 1838, Dr. Hazzard fired at Wylly and Wylly died instantly. Since both the Hazzard and Wylly families worshiped at Christ Church, the Hazzard family did not feel safe attending services there.

The present chapel is a reconstruction of the original, incorporating some of the original material. I have yet to track down the date of the reconstruction. [I’m including it only as an historical reference point, and to clarify to those wondering that it is a replica].

The Pink Chapel is not open to the public and can only be seen from a road and the edge of a driveway.

A revival meeting in 1938 led to the formation of a Baptist congregation on St. Simons Island. What began as a small group grew rapidly over the next decade and by the time First Baptist Church was dedicated in 1947 there were over 200 members. 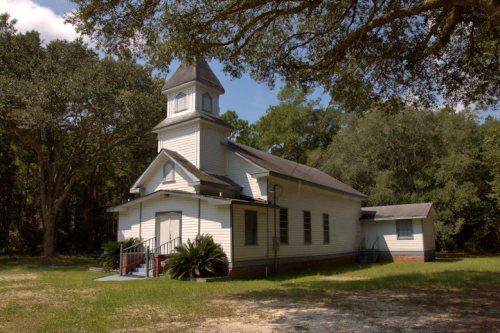 The origins of Emanuel Baptist can be traced to the First African Baptist Church, established by freedmen at Pike’s Bluff Plantation in 1869. On 6 April 1890 members of the First African Baptist Church, under the leadership of Reverend A. Neel, organized Emanuel to better serve members in the South End community. The present structure was built on 30 July 1904 and dedicated by Reverend S. C. Dent.

Now home to Lord of Life Lutheran Church, this Spanish Mission Revival chapel was originally home to St. William Catholic Church. Franciscan friars first established a mission presence near this site in the late 1500s to minister to the native Guale peoples but these early missionaries were martyred and the mission destroyed in 1597. The location was selected by Father Peter McOscar, SM, pastor of St. Francis Xavier of Brunswick, architect Cormac McGarvey, and Mrs. Edith Smith Young. It was originally served by Marist priests from St. Francis Parrish.

Several celebrities had a connection to the church during its history. In the mid-1930s, actress Irene Dunn was a member of a Confirmation Class here; the great tenor Giovanni Martinelli once sang here; Joe DiMaggio was a volunteer altar server in 1950.

Thanks to Jimmy Goodis for identifying it as the original St. William’s. 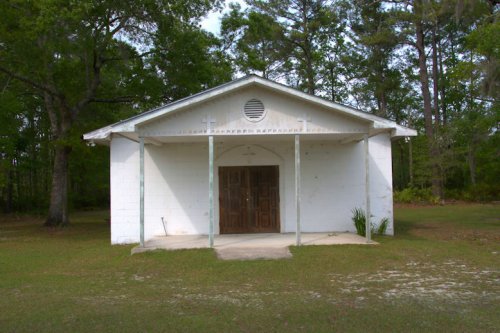 Emma Gale writes: My ancestors (The Andrews), founded this Church circa 1865-1867. Originally they were up in Rumph Island, about 10 miles, headed toward Mt. Pleasant. The church and a school was started in the home of my Uncle Dock. My Grand-Uncle (Dock Andrews), and other relatives once owned Bull Island (at the end of this Road), that the Church is on, and much of the property down this Road. My Grand uncle (Rev. Alex Anderson), brother to my Maternal Grandmother, once Pastored First African Missionary Baptist (Everett).

The recent restoration of this historic African-American schoolhouse is one of the greatest preservation successes on the Georgia coast and should serve as a model for similar projects. After the Civil War and the collapse of the plantation economy, the descendants of enslaved persons remained on St. Simons and lived in the communities of South End, Jewtown, and Harrington. They were the dominant population on St. Simons until development in the early and mid-20th century changed the racial makeup of the island. Only remnants of their presence remain, and among them, the Harrington Graded School (thought to be a Rosenwald school), and Hazel’s Cafe, are the most significant.

The school served all three African-American communities until desegregation in the 1960s and was briefly used as a day care center until being abandoned in the early 1970s. It was eventually purchased by Glynn County and the St. Simons Land Trust but due to deterioration, it was slated for demolition in 2010. The Land Trust and the St. Simons African American Heritage Coalition formed the Friends of Harrington School and saved the school house. Serious work began in 2015 and by December 2016, the school was restored to its former glory.