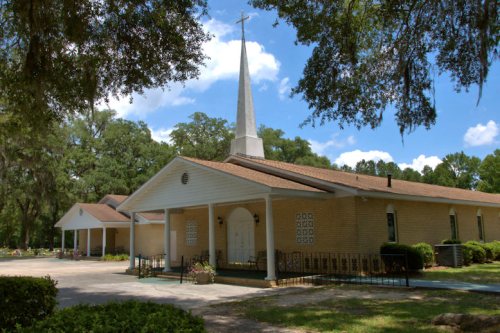 Located on the opposite corner of the intersection of the E. B. Cooper Highway and Barrington Ferry Road from First African Baptist Church, First Zion was established by members of the “Mother Church” in 1870-1871 with the Reverend U. L. Houston as its first pastor. The present structure was built in 1971 during the pastorate of Reverend B. N. Jones. The churchyard is a beautiful spot shaded by old-growth oaks.

The First African Baptist Church of Riceboro is considered the “Mother Church of all Black Churches in Liberty County”; the present structure was built in the 1960s to replace the original church. The community, just west of Riceboro, is locally known as Crossroads.

One of the early white pastors of this church was the Reverend Josiah Spry Law to whom a cenotaph was erected here in 1854 by both blacks and whites.

African-Americans were baptized in this swamp beginning in the 1840s. It’s just downstream from a well-known fishing and swimming spot known as Round Hole and was likely chosen for its proximity to that natural landmark.

Baptisms were first performed on enslaved persons by white members of the nearby North Newport Church. When the white congregation moved to Walthourville in 1854, the slaves renamed the church First African Baptist Church and continued ritual baptisms here until the 1940s. Some of their descendants are the Geechee people who still live nearby.

Today, the Historic Baptismal Trail has been memorialized as a public park with a  boardwalk, including signage identifying plants and trees that were historically important to the community. 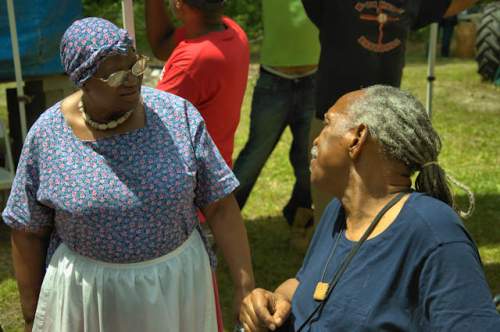 I drove down to Riceboro yesterday to see the wonderful work Jim Bacote (above, right) has done with Geechee Kunda and to check out his Gathering, an annual celebration of Geechee and Gullah folkways. Jim is passionate about preserving this history and it’s tangible. Geechee Kunda is the culmination of his lifelong fascination with this endangered way of life. I first met him a couple of years ago when he was still working on his museum and history center so I didn’t get to make any photographs. He invited me to come back and  I’m so glad I finally got to see it yesterday.

The highlight for me was a performance by the Geechee Gullah Ring Shouters (not to be confused with the McIntosh County Shouters, who organized about a decade before the Geechee Gullah). This group of dedicated men and women share the ring shout with the world and aim for authenticity. They’re historic interpreters of the highest order and preserve a tradition that was thought to be extinct as recently as 1980. Historians believe the ring shout is the oldest surviving African performance tradition in North America. While “shouting” in the vocal sense is a part of the performance, linguist Lorenzo Dow Turner, who spent a lifetime researching the Gullah language and culture, suggested that the term came from the Afro-Arabic word saut. This is a reference to the forward-moving shuffle, during which the feet are not to cross, associated with pilgrimages to the Kabaa at Mecca.

It’s hard not to come away from a performance by the Geechee Gullah Ring Shouters with a better understanding of a culture that, especially as white Southerners, we have kept at a distance at best or dismissed altogether at worst.

One thing you’ll quickly notice when you’re around the Shouters is their charisma. They’re very passionate about what they’re doing and you can feel it. You not only learn but you’re uplifted, as well.

Besides the world record ring shout, the group is also proud to have among their performers Mrs. Butler (above, right), who at 90 is the world’s oldest living ring shouter. She’s amazing.

At the end of the performance, a narrative of Emancipation is re-enacted and is quite powerful. If you couldn’t already tell, I was very moved by these living historians and would encourage anyone who has the opportunity to attend one of their events. 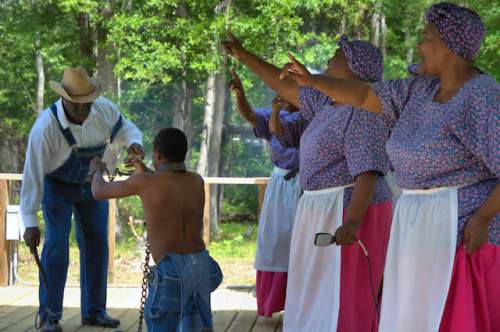 Thanks to Peter Martin for the identification. He recalls a diner and auto parts store being located here and says there was a large peach or orange “sign” where the car wash is now located. 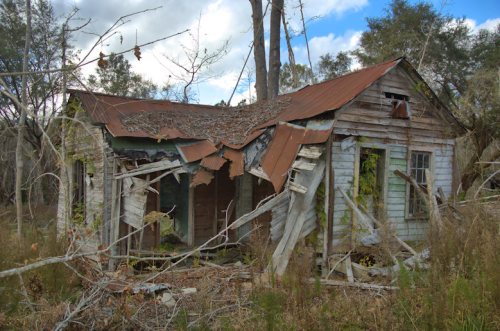 A recent clear-cutting operation has exposed several historic structures in the nearly forgotten African-American community of Chatman. Today, Chatman is part of Riceboro and can’t even be found on most maps.

This store, in the Chatman community of Riceboro, likely dates to the 1930s or 1940s. Chatman is an historic African-American community with few other tangible links to its history. 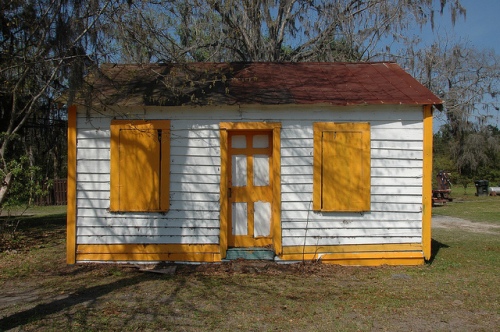 This is nearly identical to the chattel houses found throughout Barbados. Some have suggested it is a slave house but a gentleman living near the property told me that it was very old, bu not that old.