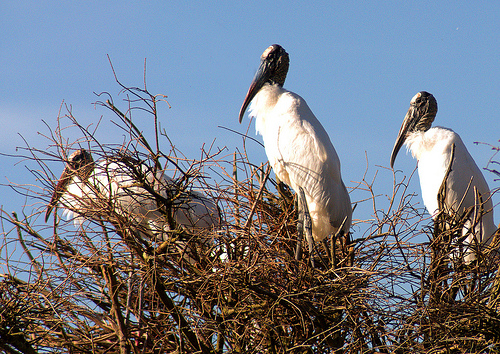 Wood Storks (Mycteria americana) were once a symbol of the diminishing wetland habitat necessary for their survival in the swamps of the Southeast.  For a time one of the most endangered species in America, recent years have seen gains in their population, enough so that the Fish & Wildlife Service is considering removing them from the endangered list. They would still have a threatened status. A friend of mine recently suggested I not place them on a “vanishing” site; in honor of her positive outlook, I offer them as an evocation of how far we’ve come in protecting Georgia’s wetlands but a reminder in how much we still need to fight to protect them. Anyone who has been around Coastal Georgia in the past few years knows that population and development race forward, nearly unfettered.

Visiting Harris Neck National Wildlife Refuge in late winter and early spring when the Wood Storks, along with myriad other waterfowl and waders are abundant, is a must-do when in McIntosh County.